Production profiling in fractured wells using Distributed Temperature Sensing (DTS) is challenging due to the significant impact of the stimulation fluid cooling on the thermal balance around the well. Quantitative flowrate estimation using DTS relies on the comparison of the wellbore flowing temperature with the surrounding thermal background. Even two to three years after being stimulated, the surrounding temperature of a fractured well is significantly modified and highly heterogeneous. In this work, a model to analyze the temperature signal associated with the flow-back period after hydraulic fracturing is presented, along with the pilot testing of 15 datasets.

The model extends the scope of an industry-leading thermal production logging software with fracture diagnostic functions. During the development process, we identify the main differences in analyzing temperature data between conventional and hydraulic fracturing wells. Due to the thermal changes of the stimulated region, several parameters and procedures, including the most critical geothermal background, are tested and re-defined. A method to reconstruct the geotherm is developed, followed by its automation and implementation in the software package.

The results of the model are temperature modeling and production profiling in fractured wells. The spatial resolution of the production profiling ranges from stage to cluster level. The flowing temperature profile, jointly affected by the inflow fluid temperature, heat transfer, and Joule-Thomson effect, is significantly altered by the hydraulic fracturing operations. The Joule-Thomson effect is drastically reduced compared to conventional wells because of the improved flow conditions from the fracturing operation. Cooler stimulation fluids lower the thermal background near the wellbore. The automatic geothermal selection developed in this model uses the shut-in temperature profile and the pre-stimulation reservoir temperature to re-construct the fluid inflow temperature. When the fluids are inside the wellbore, their thermal behaviors are similar to what is observed in conventional wells except for the surrounding overall heat transfer. For a horizontal well stimulated with hydraulic fracturing, the transfer efficiency is lower compared to a conventional vertical well. As a pilot testing project, this model is tested on flow-back temperature data from 15 datasets, where cluster spacings range from 15 to 400 feet. The production profiling results using the model are consistent with profiles obtained from other data sources.

Consistent behaviors, efficiency, and performance at the stage and the cluster levels show that the quantitative flow profiling on flowback and post-stimulation production DTS data is possible and reliable. 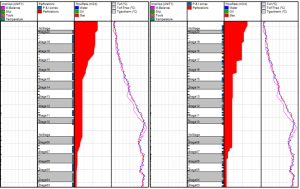